Diving Boracay, from small to large

On Boracay there are many dive centres. I have chosen Aqualife Divers because this dive center seemed to be the friendliest, but that's really just a very subjective impression. Nevertheless, it was the right choice. Diving on the Philippines is really pure diving. You are greeted in the morning with a friendly welcome, get a warm cup of coffee pressed into your hand and while you enjoy it, the employees put together the equipment and carry it on the boat. All you have to do is put on the wetsuit yourself. With the outrigger boat you reach your destination very quickly and off you go.
The guys are so cool that you can do special dives like the "Underwater Alcoholic Speciality Diver". The point of departure was that we had hired Jacques von Artifishal for video recordings and we wanted to have a special kind of dive on film. The goal was to dive down to 15m with shorts, shirt, cap and sunglasses and drink a bottle of beer. For this purpose I had mounted the snorkel attachment on the beer bottle neck. Of course, we were practically blind and Jacques had all the trouble to get us on course somehow. Result: the beer was 30 degrees Celsius warm and a bit salty. My buddy swallowed the beer while trying to drink it and almost drowned. One could not do something like this in the Maldives.... 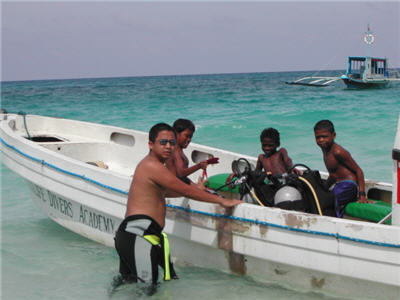 One morning the phone rings and some voice tried to make me understand that they had caught a whale shark and that it would start at nine o' clock. I had a little headache (see eating and drinking) and Esthi had to get me really awake. Still I could not imagine how the dive center should have a whale shark. The secret was then gradually revealed. A brother-in-law of the base owner is a fisherman and has a whale shark on the net. Now you have to imagine that in a bay huge nets are laid out, which are pulled a while later on land. So the shark has huge enclosures and is not so caught that it would choke. However, the fishermen would certainly have killed the shark in the past, but now they are turning it into an event thanks to diving tourism. Even Philippine television was there. So we went by outrigger boat, bus and visit with the dear relatives to whale shark diving. There I shot a whole film and only reappeared with 10bar in the bottle. The fishermen welcomed us with a great lunch with freshly caught squid and other fish. That's what I call a perfect diving day.
The sea around Boracay is characterized by a lot of small sea animals like frogfish, colorful sea snails, moray eels and crabs, so ideal for photographers. You can also see a sea snake from time to time. It is a very special feeling to get in touch with a snake, which is three times more poisonous than a king cobra. However, the animals are not aggressive at all and I doubt that they could really bite a human being with their little mouth. 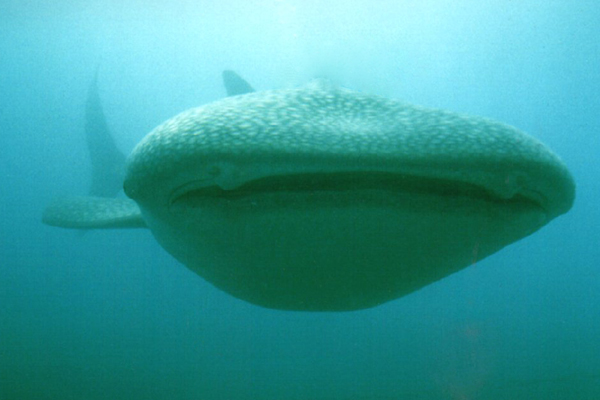