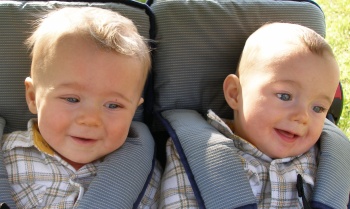 On July 18,2006 our two twin sons Timothy - called Tim - and Michael alias Mike were born. This was the end of a difficult pregnancy and at the same time the beginning of a completely new, exciting and varied life.

The two were - as usual for twins - about a month too early and of course too light. Tim weighed a little over and Mike a little under two kilos. They also had to stay in the intensive care unit of the University Children's Hospital for two weeks until they were stable enough to come home to us.

In the first few months not much happened, the children were content with eating, sleeping, filling up their nappies interrupted by crying. But then they discovered that they could move with rolling back and forth. At the age of 11 months they started to stand on their own two feet. First with the help of the wall or playpen, then without. When they reached the age of one year they could already make their first steps. After that, everything developed very quickly and now they don't need the pram any more and go everywhere on their own feet. 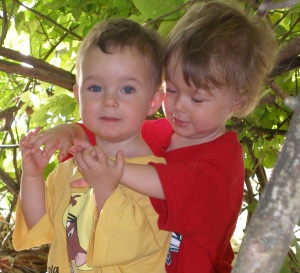 For me this is all great and as difficult as the two of them can be, they are - after a nerve-wracking day of work - a real highlight when I come home. In the meantime they speak very well and can tell the daddy in the evening what was happening through the day.

The two of them get along very well with the dogs. Naturally, as children are, they are dealing with them.